You’ve been notified! Please include important information for parents, students, or teachers here.

Welcome to Warren T. Eich Home of the "Wildcats!" 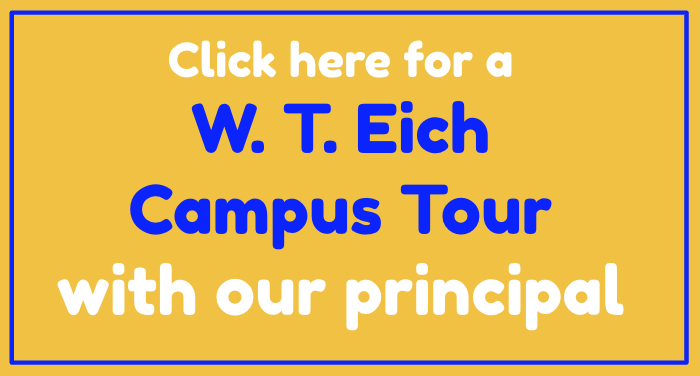 We are a community that offers top-notch engaging programs where EVERY student can find their place and their passion.

We are a family of individuals from varying backgrounds who care about the well-being,  educational, and social-emotional growth of all members of this community we call EICH.

We are a community of people working to create global citizens in a changing world.

Warren T. Eich Middle School, which was originally opened in 1964 as a 7th/8th-grade Intermediate School, has experienced many successes academically, athletically, and within the community.  During the 1999 to 2013 school years, Warren T. Eich received some of its most prestigious honors.  In 1999 and 2013, Eich was selected as a California Distinguished School and was also named a National Blue Ribbon School in 2000.  During 2006 Warren T. Eich received recognition as a Project Fit America School and in the fall of 2008 Eich became an AVID (Advancement Via Individual Determination) National Certified School.

Warren T. Eich also has strong ties with the community by participating, on a yearly basis, in the annual Lions Club Canned Food Drive, a Toy Drive which supports Woodbridge Elementary School’s Giving Tree to supply gifts and books for underprivileged students during the holidays, Eich’s Jingle Bell Run which raises money for low-income Eich families, and St. Baldrick’s in the fight against cancer. Each year every 8th grader completes a community service project, not only benefitting the community but benefitting students by broadening their world view.

If you would like to see our school in action, please feel free to watch this campus tour video with our principal, Mr. Brown or reach out via email to schedule an in person campus tour (due to COVID-19 health guidelines, our campus tours can only be scheduled after school hours).

We look forward to hearing from you and thank you for considering us for your middle school experience.

This item appears in